The following is an extract of an article I wrote about Carrickfinn Peninsula which appeared in Take Off magazine 2016. To read it in full, see Take Off magazine at Donegal Airport or one of the many tourism providers in Co. Donegal. 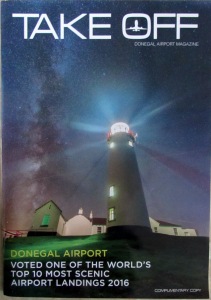 Carrickfinn is located in an area called the Rosses in west Donegal, Ireland. The Rosses is a granite plateau dipping into the Atlantic Ocean. It takes its name from the native tongue Na Rosa or the headlands. The most northerly of these is called Ros Scaite meaning remote headland.

Ros Scaite covering around 300 hectares elevates from a machair adjacent to Donegal Airport to the highest point near St Andrew’s Church. Ros Scaite sometimes referred to as Pointe Ros Scaite is made up of four townlands, namely Mullifinns, Carnboy, Dunmore, and Carrickfinn. Over the years it was a tidal island which became a peninsula just before the construction of a causeway from the mainland at Braade in 1945.

Mullifinns (Na Maola Fionna) meaning the white low hill-tops is the oldest centre of habitation in Ros Scaite and indeed in west Donegal. Evidence of human activity here can be found in a kitchen midden which nestles at the base of the large sand-hill situated northwest of the runway at Donegal Airport. There have been various finds at this site over the years suggesting at least three phases of occupation.  It suggests that there were human habitation here in the Bronze Age, the Middle Ages ….

It was close to here that Donegal Airport had its humble beginnings in the 1970s, when a visiting Welshman landed his single engine plane there. Before he could make a successful landing ….

Moving north across the sand-hills is the town-land of Carnboy (An Carn Buí) meaning a yellow rocky place. Here we find a working example of a clachan; a small traditional settlement dating to the early eighteenth century. It was in this clachan that one of the first modern schools in the Rosses was ….

To the west Oileán na Marbh or the Island of the Dead lies just off a small fishing harbour, aptly named The Boat Strand. The island was ….

Donegal’s rugged coast is a graveyard for many shipwrecks down the years. The coastline of Carnboy has its fair share of these wrecks. Some had yielded “treasure” to the local beachcombers. One such wreck floundered close to Oileán na Marbh in the early years of the eighteenth century. On inspecting the wreck, two local men received their prize; a large town clock. They put the clock into their currach ….

A market day held on a Thursday and annual fair in Ros Scaite was recorded by the English ….

To the east of Carnboy lies the townland of Dunmore (An Dun Mhór) meaning a large hill-fort; now gone in antiquity. There are two lakes ….

Over the years Dunmore and indeed Roscaite has lost and gained territory through erosion. In the early twentieth century a fierce storm cut off Inis Shoinnaigh, a tidal island linked to Dunmore and accumulated the sand around Dún Ramhair Island meaning thick island ….

To the south of Dunmore is Carrickfinn (An Charraig Fhinn) meaning Fionn’s (McCumhaill) Rock. Carrickfinn is in many ways the administrative part of Ros Scaite. In 1822, a detachment of the coastguard service was set up here to curb the smuggling of contraband along this coastline. Numbering up to thirty naval personnel ….

A number of folk living along the eastern shore provided a ferry …..

This site uses Akismet to reduce spam. Learn how your comment data is processed.