The fishing community of Donegal has had a remarkably successful season. Up to August things were little better than average years so far as supplies went, but, of course, more advantageous in the better figures realized. Then towards the end of the month shoals of herrings appeared unexpectedly in the fishing grounds, and the whole fishing population was immediately astir. 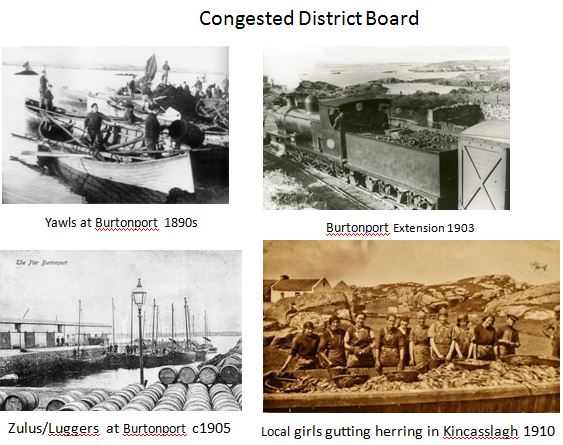 The Congested Districts Board was apprised of the prospects, and arrangements were forthcoming for making available the motorboats and sailing boats provided by the Board along this section of the coast. In due course a contingent of Scotch and Irish buyers appeared on the scene, and, with keen competition, the Donegal folk have been able to reap a splendid herring harvest. There were times during the season when the price of herrings went up to as much as from £3 to £4 and £4 10s a cran, and even higher. Reduced to a more easily understood basis, the higher quotations mentioned worked out at as much as 2d apiece for the fine qualities which are attracted to these Northwestern grounds, and the fishermen, as might be expected, rejoiced in their luck. The Board’s steam-drifters were requisitioned by the Admiralty.
The New Motor Boats
One of the developments which has accrued to the fishing interests in the district is concerned with the matter of the provision of the motor-boats and steam-drifters by the Congested Districts Board. Up to 1894 only open boats of the Greencastle yawl type
had been in use by the Donegal fishermen.

In that year a number of large decked sailing boats, known as the “Zulu” type, were introduced by the Board for herring fishing at Downing’s Bay and other centres. These boats were worked by crews on the share system, a boat and gear being handed over to a crew of six as joint owners, subject to a repayment to the Board of about one-third of the net earnings. The system worked satisfactorily for many years, and the Board were repaid the entire cost of the boats and gear originally supplied. There were still several others of these craft, however, in respect of which considerable sums had yet to be discharged before the debt to the Board would be cleared off.

In 1907 a big change had to be met. Steam-drifters, which had been introduced into Scotland and England, took part in the Donegal fishery, with the result that the crews of the local sailing boats were discouraged by their inability to compete with the steam vessels which were able to land large catches both in stormy weather and in calms when sailing boats had to remain in harbour. Even when sailing boats were able to go out, the steamers could go farther out to sea where the best fishing grounds are and get back sooner to harbour, thus securing better prices. The Donegal fishermen, therefore, urged the Board to provide them with steam-drifters and motor-boats, so that they might share upon equal terms in the fishery off their own coast. With the aid of a loan from the Development Commission the Board acquired some steam-drifters and motor-boats.

Activity at the Centers
The principal centers of the industry are at Downing’s Bay, Kincasslagh, Gweedore, Burtonport and Killybegs. Each of these places is a port where the fishermen keep their boats and where buyers attend, and the marketing conditions, influenced by the scarcity existing in the chief centers across the Channel, have been such as to assure fair ruling quotations at
every center. Buncrana, on Lough Swilly, which used to be the chief market, and in years back was the biggest and most important fishing base in the North-West, has suffered
because of the Admiralty Order closing Lough Swilly tor fishing, except in a restricted way within certain local limits, and the principal market is now at Downing’s Bay in Sheep Haven. Here a very large quantity of herring has been cured for export, and at the other centers mentioned the season has been scarcely less busy. At Killybegs in August, 1915, herrings of extraordinary fine size and quality were landed. Only a relatively small proportion of the catches was dispatched fresh to the markets.
Donegal Salmon Fishing
An interesting story appertains to the very appreciable development in the salmon fishing which has taken place off the West Donegal coast in recent years. It was not known that
salmon, when proceeding from the deep water to rivers, followed the same course year after year. To the late Father Bernard Walker, of Burtonport, is due the credit of proving this theory, and that, too, in the most incontrovertible manner. During some boating trips well outside the islands which fringe the Rosses, his observation was directed on a few occasions to the splashing of salmon, as he conceived it to be, and curiosity tempted him to try his luck with a salmon net along a course where he had seen salmon rise. His acumen and his enterprise were rewarded in a fine capture, and his initiative was quickly followed by the fishermen of the West Donegal coast, who found in the new grounds a successful area of operations.